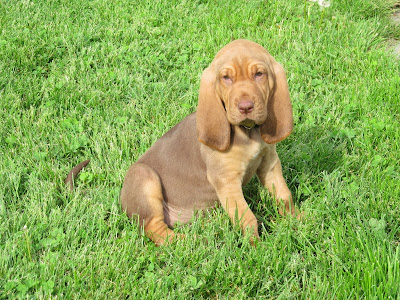 She is cheerful and pretty darn cute. 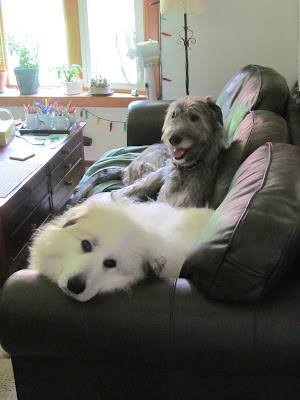 So far, Clover and Lily like her best when she is napping. 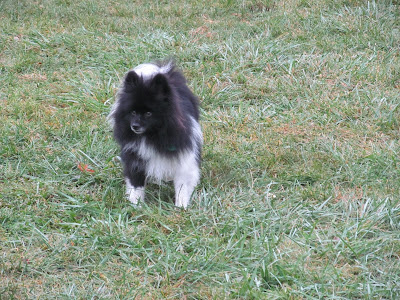 A Couple of Cranes


The other day, Lily was barking up a storm.  Why? 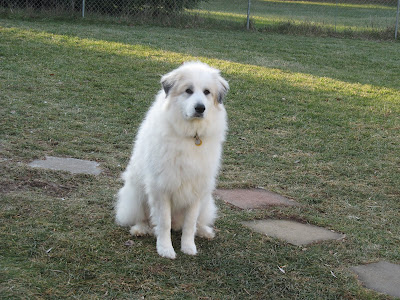 She sighted a couple of trespassers just outside the inner perimeter. 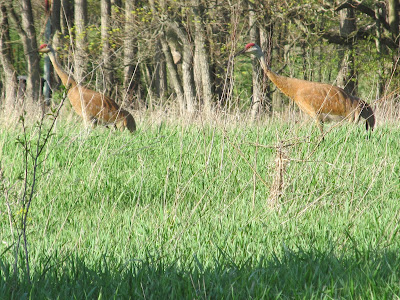 There are many Sandhill Cranes around here but we've never seen them in our yard before.  They makes nests on the ground in grassy areas.  Will this pair make a nest here?  Stay tuned. 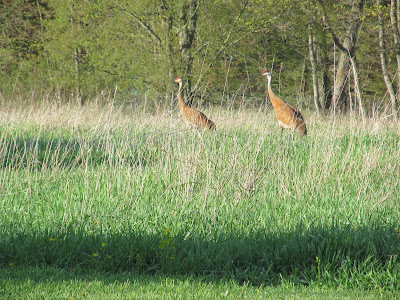 Whitetail deer are found from South America to southern Canada.  They dwell mainly in wooded areas.  Their reddish-brown color changes in colder weather to a thicker gray-brown coat. 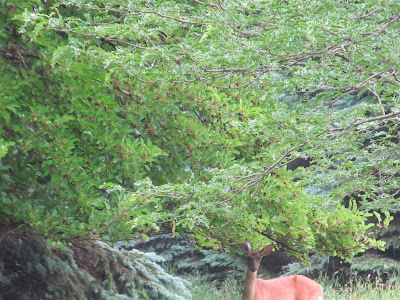 Herbivores, the whitetail deer eats leaves, twigs, fruits, nuts, grass, corn, alfalfa, fungi, evergreen foliage.  They are not territorial but have a home range.  Some deer may spend their entire life in a one square mile area. 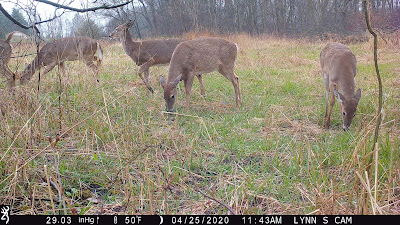 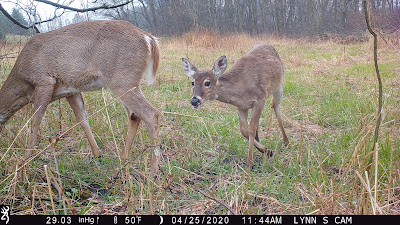 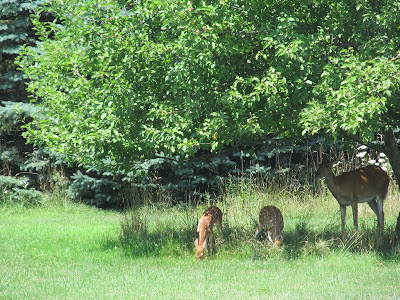 Does have one to three young usually in May or June  after a gestation of 7 months.  A fawn can stand as soon as its born and can begin to forage at three weeks.  Females live in matriarchal groups.  Bucks will often hang out together with a dominant buck in charge.  Around September however, they are competing for mating rights and often fight each other using their antlers.  Antlers are grown annually and fall off in winter. 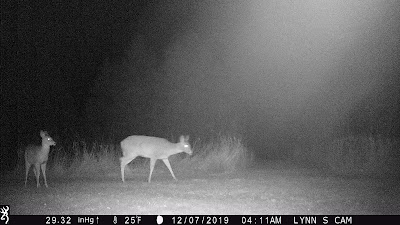 Whitetail deer are primarily nocturnal and crepuscular.  They have eyes on the side of their heads allowing them 310 degrees of vision.  Their ears can rotate in any direction.  They also have a good sense of smell. 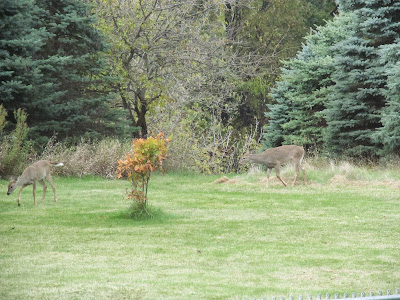 
It's been six weeks since a state of emergency was declared here in Michigan.  We've been ordered to cower in our homes.  We wear masks when we go somewhere that is permitted.  When will it end?  First we were told in order to save lives, we'd only have to give up our freedom till the curve flattened.  It has.  Now the bar has been moved. 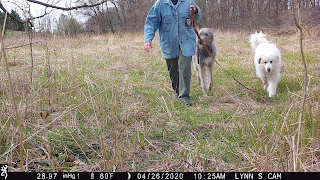 Yesterday Gov Whitmer said we're still safer at home.  As long as the numbers meet with her approval, manufacturing will be permitted to reopen May 11 provided they take everybody's temperature at the door, don't allow nonessential persons to enter, do social distancing, wear masks, etc etc.  The automotive industry may be permitted to resume operations May 18th.  For those still considered nonessential, the stay at home order has been extended to May 28. 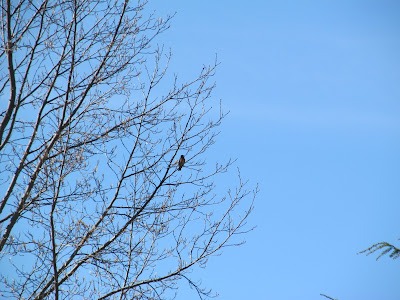 Meanwhile, businesses such as restaurants and hair salons and veterinarians remain either closed or very restricted.  How many of these businesses will be lost?


What of the new normal?  Will we don masks everywhere we go from now on? 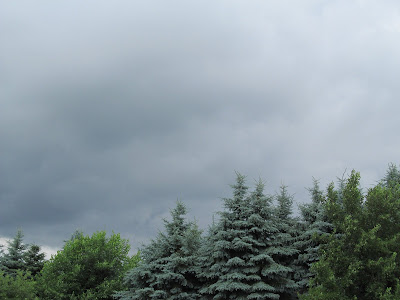 Will we retreat to our homes and shut down the economy every flu season? 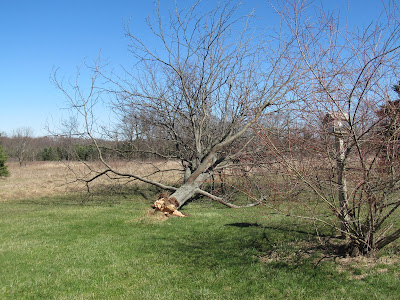 And what of the nonessentials?  Are they forever second class citizens rendered hopeless in their insignificance? 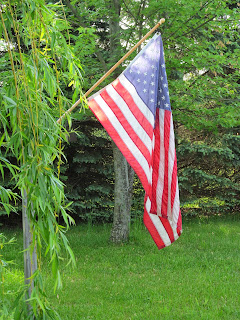 Have we traded our liberty for an illusion of safety?
Posted by Lynn Benoit at 9:35 AM 5 comments: 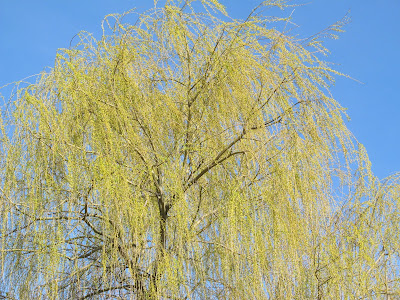 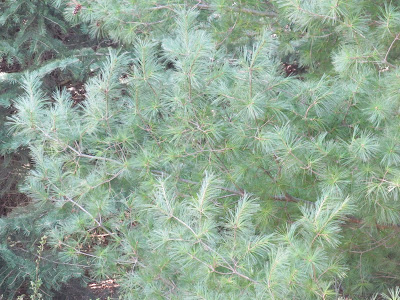 The wind blows where it wills, and you hear the sound of it, but you do not know where it comes from or where it goes;  so it is with every one who is born of the Spirit.
-John 3:8
Posted by Lynn Benoit at 5:30 PM 3 comments: 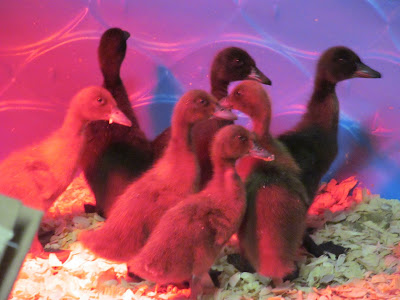 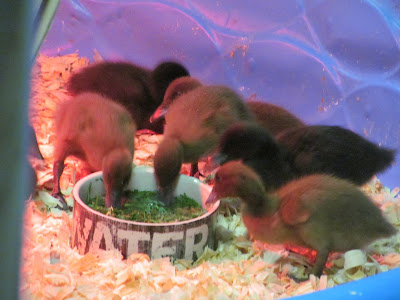 When I was a kid I had some Guinea pigs as pets.  One of them was a white one named Wesley. 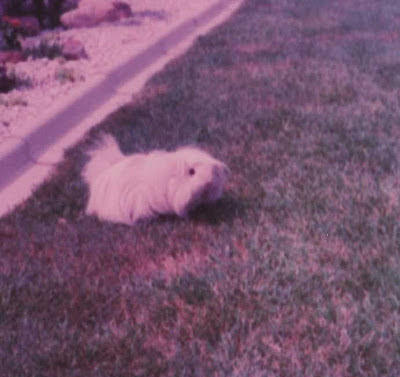 What have you herd? 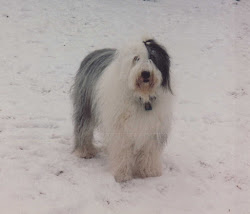 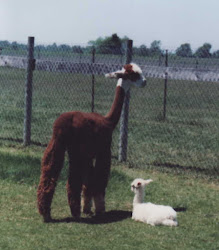 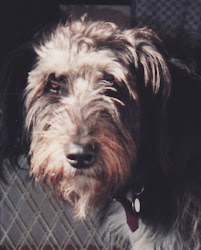 Let a poker face be your umbrella to keep your humor dry. 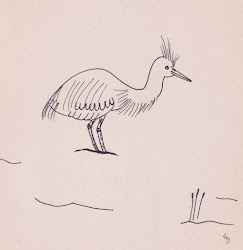